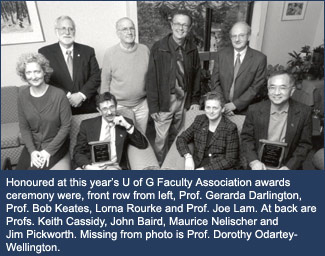 At its annual awards ceremony Oct. 21, 2004, the University of Guelph Faculty Association (UGFA) marked its 50th anniversary by presenting six Distinguished Professor Awards, an Academic Librarianship Award, a Special Merit Award and, for the first time ever, an Award for Excellence in Service to Faculty and Librarians.

The new award, which was presented to Prof. Keith Cassidy, History, honours his outstanding contributions that have had a significant impact on faculty and librarians at U of G. Cassidy, who served as UGFA president from 1996 to 1997, has played a key role in the development of virtually every major policy relating to terms and conditions of work for faculty, says current president Prof. Roz Stevenson, Microbiology. He can be credited with a consistent effort to ensure that academic freedom is protected and respected for scholars in the University community.

Cassidy was doubly honoured at the ceremony with his receipt of another new award, the Canadian Association of University Teachers' (CAUT) Dedicated Service Award. Designed to recognize individuals for exceptional service to their faculty associations, the award was presented by CAUT president Loretta Czernis. Also on hand were CAUT executive director Jim Turk; Michael Doucet, president of the Ontario Confederation of University Faculty Associations (OCUFA); and OCUFA executive director Henry Mandelbaum.